A recent study from researchers at Columbia University (Platt, Prins, Bates, & Keyes, 2016) puts forth a possible new explanation for the higher rates of depression and anxiety seen in working women—and women in general—compared with rates in their male peers: the well-documented gender wage gap.

Jonathan Platt, MPH, and his colleagues reviewed a subset of data from one of the largest national surveys on substance use and other psychiatric disorders, administered to more than 22,000 working adults in the United States (30–65 years old). They found that the odds of experiencing depression within the past year were 1.96 times higher in women than in men, and rates of past-year anxiety were more than 2.5 times higher in women than in men. However, those numbers trended differently when Platt et al. examined rates of distress according to men’s and women’s earnings. 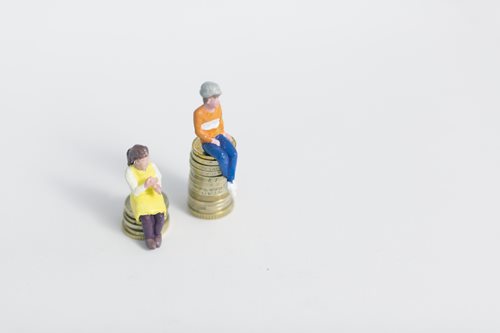 A new study finds that the gender pay gap may affect depression rates among women.

To derive income comparisons, men and women were matched on factors such as age, education level, industry of employment, and marital status. They found that, when women earned an income equal to or greater than that of their matched male counterparts, the odds of experiencing depression were generally the same across both genders. However, when women earned a lower income compared with their male counterparts, the odds of depression were 2.43 times higher. Similar findings were observed for anxiety: Women earning less money than their male counterparts reported more than four times the rate of anxiety of men, whereas women earning incomes equivalent to or higher than those of their male counterparts reported much lower odds of exhibiting anxiety. These patterns were apparent, even among women earning higher incomes, suggesting that the presence of mental distress was not strictly a by-product of low income and its negative consequences.

The study authors suggest that these findings could indicate that underlying structural discrimination—rules and practices that disadvantage specific groups of individuals, such as women or ethnic minorities, and exemplified in this case by wage inequality—contributes to women’s disproportionate reports of depression and anxiety, particularly if women are internalizing discriminatory acts as a reflection of their low worth rather than that of biased institutional practices. Platt and his colleagues interpret gender-related income disparities as suggestive of women being undervalued and as a potential proxy for other forms of bias, such as denying promotions on the basis of gender. There is substantial evidence that discrimination—including sexual harassment and workplace aggression—is associated with depression, anxiety, symptoms of posttraumatic stress disorder, and substance use (Larsen & Fitzgerald, 2011; McGinley, Richman, & Rospenda, 2011; Rospenda, Richman, & Shannon, 2009). However, this is one of the first studies to link wage inequality as a discriminatory practice with mental health differences in men and women.

“This research suggests that the gender wage gap is truly more than just an economic issue and is something that employers and companies should prioritize,” said Renée Binder, MD, president of the American Psychiatric Association. “Although mental disorders are highly complex and there are likely numerous factors contributing to the higher rates of depression and anxiety seen in women in the workplace, these novel findings will hopefully spark larger discussions about the effects of denying women equal pay and the ways in which structural discrimination are being manifest in today’s world.”

The latest findings from the U.S. Census Bureau indicate that women earned 79% of men’s earnings in 2014 (U.S. Census Bureau, 2015). However, in Platt et al.’s (2016) study, published in the journal Social Science & Medicine, women were found to be earning only 67% of men’s pay, even when adjusted for productivity.

“The effects of income disparity for women are far-reaching, and ensuring commensurate salary is not only good practice ethically and morally and is good for retention, it is also good for health,” Binder added.

Emily A. Kuhl, Ph.D., owner and operator of Right Brain/Left Brain, LLC, is a consultant to the Partnership for Workplace Mental Health and a medical writer and editor in the Washington, D.C., area.

Across every industry, field, and background, employers have an incredible opportunity